On February 27, 1998, my 10-year-old German shepherd dog Sonntag (Sunday, in German)  suddenly became paralyzed while chasing a ball.  Later in the day, as he was operated on, it was discovered that he had sustained a disc rupture years before, and so it was too late to do anything to cure him of his paralysis. Several months later, I got a canine wheelchair for Sonntag, and he went on to live a pretty full life until his front legs started to fail him.  He was put down on April 10, 2001.

I also had Sonntag's sister, Kessie.  On the day I adopted Sonntag in September 1987, there was another couple, Al and Judy Phillips, with their two children, Shane, then13, and Mindy, then 11, at the place where I got him.  After I took Sonntag, they took Kessie because she was the only of the three females playing with Sonntag, meaning she was the dominant female.  Because these two dogs were buddies, we did not have the heart to separate them, so just about every weekend for the next two years I would take Sonntag to the Phillips' home to play with Kessie.  Sadly, Al, Judy, Mindy, and one of Mindy's friends were killed in a plane crash on August 27, 1989.  Shane had just left for school in Germany when the accident occurred.  Since I was the only one who knew Kessie well, I went out to the Phillips' home to get Kessie, and kept her with me until Shane returned home a few days later.  Two years later, when Shane was setting off to college, he could not longer keep Kessie and was about to give her away to someone when I decided I would take her and find a home for her.  As it turns out, two days later, after seeing how she loved living with her brother and the life she could have with us, I decided that I had no choice but to keep her, and did. What a wonderful decision that was as she turned out to be my sweetheart.

One day in October 1998, as I was returning from taking Sonntag swimming at an animal swim center, the rear door of my Land Rover flew open and Kessie fell out.  Shortly after that, she started to have occasional bouts of losing her sense of balance. The first two times this happened, she recovered within days  But then on July 6, 1999, the day after her and Sonntag's 12th birthday, she had another bout and despite an operation (for a deep inner ear infection), she never recovered.  Kessie had to be put down on July 29, 1999, one of the saddest days of my life.  I still miss that magnificent dog to this day.

Life went on in our household for Sonntag and me, and in March 2001 I left the Federal Reserve, where I had worked since 1973, after being recruited by the Russians to coordinate banking reform for them.  As I started preparing to move to Moscow in June, I realized that Sonntag, who was about to turn 13, probably wouldn't be able to handle the stress of the move or the life in Moscow, with my working long hours every day.  So I decided that, after having managed him as a paralyzed dog for more than two years, it might be getting time to let him go.  But before I did, I decided to treat him to one more ride in the car, his favorite treat, and then put him down at then end of the trip so I could get on with my life.  It was only fair, I reasoned. At first I thought about spending two weeks at Mont Tremblant in Quebec, where we had spent perhaps seven winter vacations together.  But why two weeks, I asked, why not two months? And then I asked, why Mont Tremblant, why not. say, Alaska?  So I looked at a map and, recalling from Joe McGinnis's' book, Going to Extremes, about the 500-mile dirt-and-gravel haul road up to Prudhoe Bay, I decided to take Sonntag on the longest road trip anywhere in North America from Washington, DC.   Two months of sheer joy for him would be much more than he would get over the next year, which would probably be his last year anyway. And so, without ever having taken anything but one-day road trips in my entire life, on August 3rd, I sent an e-mail to the Russians to tell them I'd be over there in October, and I then loaded Sonntag into my Defender, and off we went to Prudhoe Bay.

Several weeks before we left for Alaska, I was approached on the street by a gentleman named Bill Allen, an editor for the National Geographic (NG).  He apparently had been watching me almost daily throwing the ball for Sonntag on the knoll that sides the route he took to work each day.  He told me that the NG had just opened up a story about dogs and he would love to have the photographer come by and take a few photos of us for the magazine.  I told him that he'd better hurry up since we were leaving for Alaska in a few weeks and Sonntag might not return if the trip proves to be too much for him. The photographer assigned to the story convinced Bill to let him go to Alaska for the shoot, and we agreed to meet up at Fairbanks on August 15th. We made it there on the evening of August 14th. The "few photos" Bill Allen wanted to get of Sonntag morphed into almost 3000 film photographs.

At some point in the future, I intend to chronicle that splendid 42-day, 12-500 mile road trip with Sonntag here.   In the meantime, here are several links you may wish to look at in the meantime.

While we were in Alaska, at the site of the photo showing Sonntag and me going into the tent at night in a snowstorm, the night before that photo was taken, the scene was such an extraordinarily beautiful one that I said to Sonntag as the two of us sat on a small prominence jutting out onto the tundra, "This is where I will return one day to spread your and Kessie's ashes. This is the scene I want to remember the two of you by."

Here is a map of our journey: 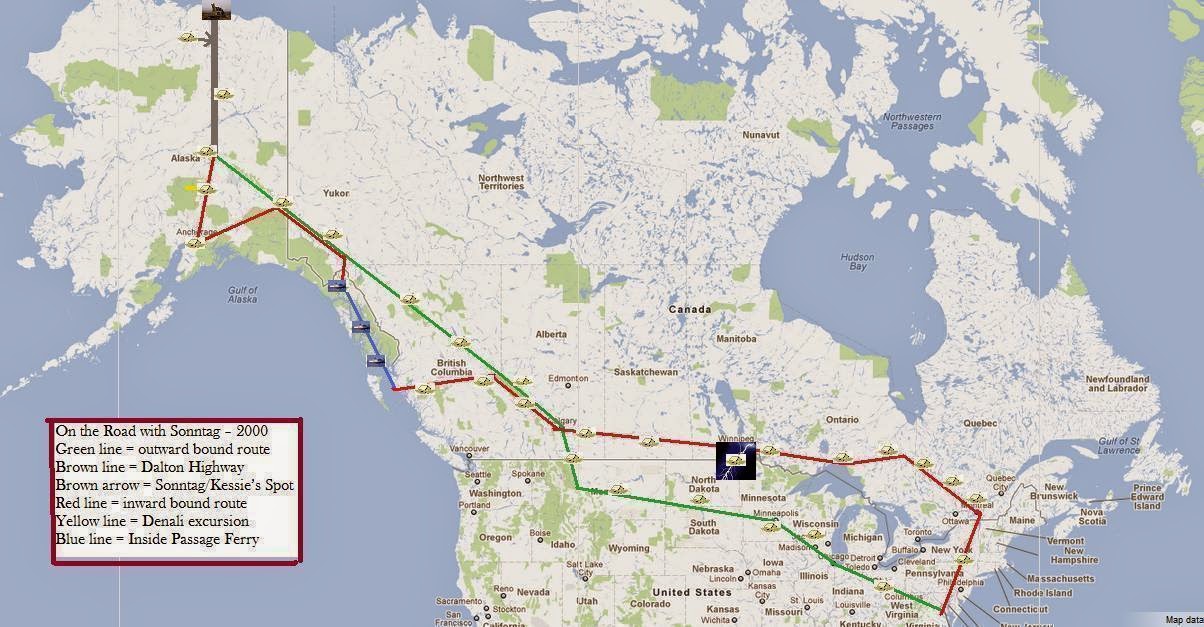 After we returned home from our trip, and it came time to let Sonntag go, I realized how shortsighted I must have been to think that I could put this dog down, especially after spending 42 days not more than three feet away from him almost 24 hours a day. So despite the life-time dream job waiting for me in Moscow, I sent a brief message to the Russians that they "will have to go on with banking reform without me, as I have other projects and priorities I must tend to."

On April 5, 2001, Sonntag started to show great difficulty in using his front legs. After watching him for the next five days, I decided on April 10th that I had to let him go. After he was euthanized in the rear of my Defender, I drove his body myself to the pet crematory and returned with his ashes.

The day after Sonntag was put down, I wrote a short essay for The Washington Post, essentially thanking the people of Washington whom we had met on the street for their kindness toward Sonntag.  That piece is shown below. 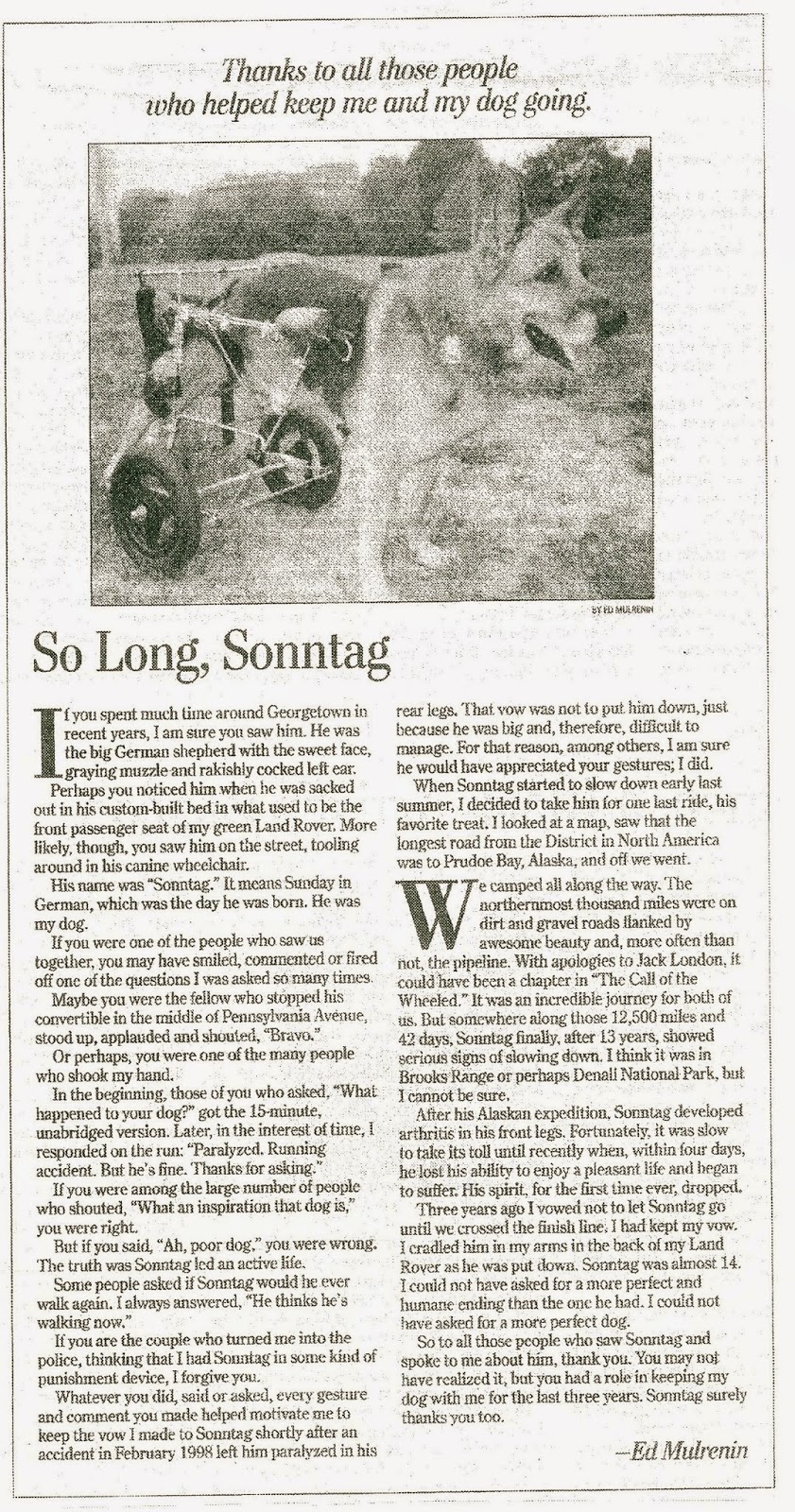 In the weeks after Sonntag died, I took time to evaluate my priorities in life.  I then had to make a decision.  For then next 10 or so years did I want to go to Russia and make perhaps an additional $200,000 a year more, or did I want to experience the great joy that I had with Sonntag and Kessie, and before them Montag. By May 31st,  my mind was made up. I then got into my Defender, drove out to the eastern shore, and by nightfall I was home with two new German shepherd siblings, whom I named Leben (life in German) and Erde (earth in German), two words I value highly.

Days after Leben and Erde came to live with me, I had another decision to make: when do I carry out my last promise to Sonntag and Kessie?  And so, in early August, I loaded Leben and Erde into the Defender, just as I had loaded Sonntag in there one year before, and off we went to the Arctic.  You can read about that journey by clicking here.  In that story I did not talk about the real purpose of that mission, which was to scatter Sonntag's and Kessie's ashes.  Perhaps someday I will write more about it.  But let me tell you something, I will remember that night, which was exactly one year from the date of the NG photo of Sonntag and me going into the tent in the snowstorm, for the rest of my life. With my two obedient pups in attendance, the lush, dramatic  music from Wagner's Siegfried and Gotterdammerung in the air, a sky ignited by an array of numerous radiant colors from the setting sun over the distant mountains beyond the North Slope, and not a person* within hundred of miles of us in all directions,  I spread the ashes of my two beloved dogs over the tundra, where they can run free forever.

* There was one exception. Earlier in the evening, a Czech couple I had met hundreds of miles down the highway, Peter and Vera, drove by on their motorcycle, and we chatted for a bit. 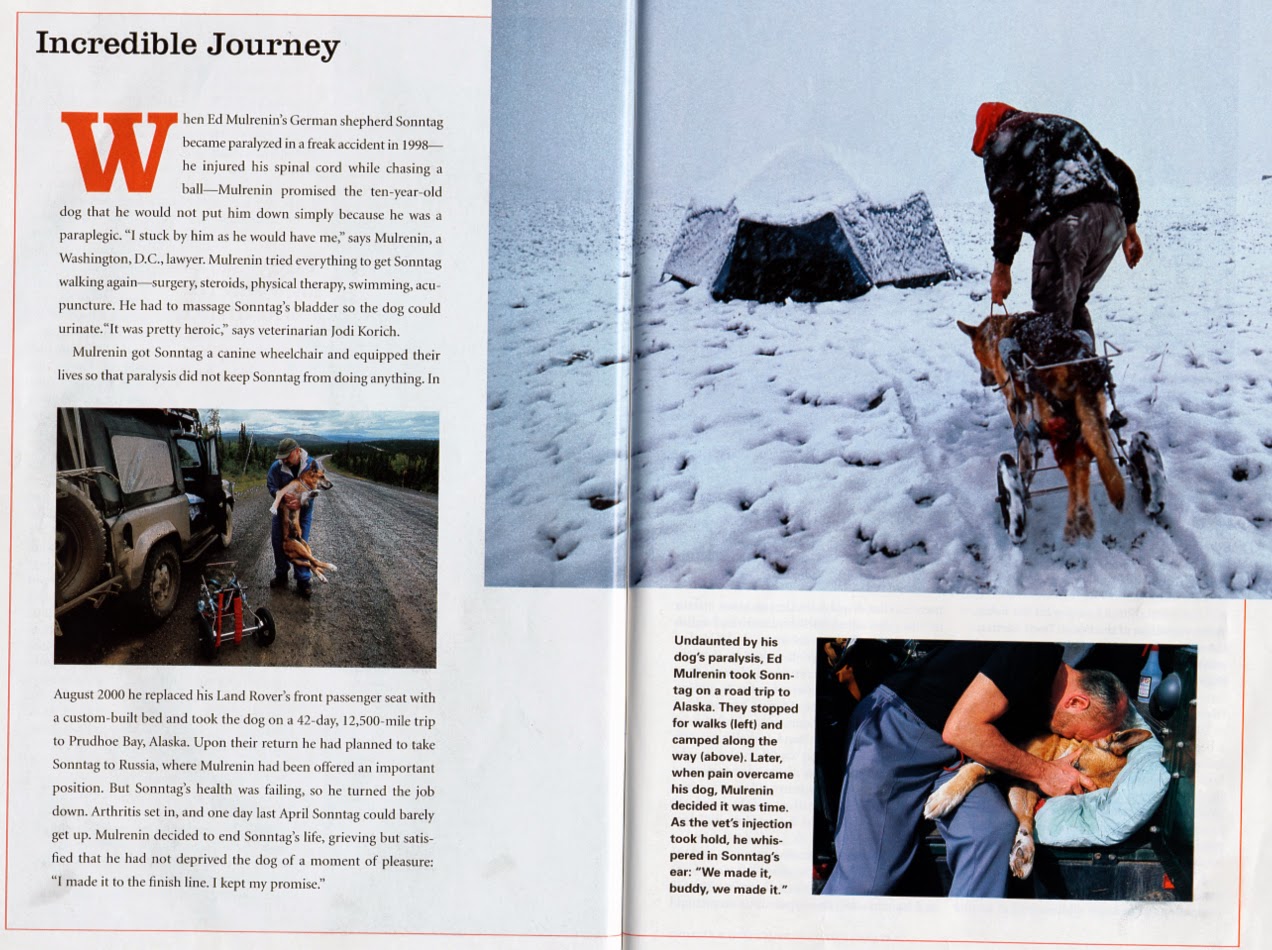 Natiopnal Geographic Article on Sonntag, May 2012 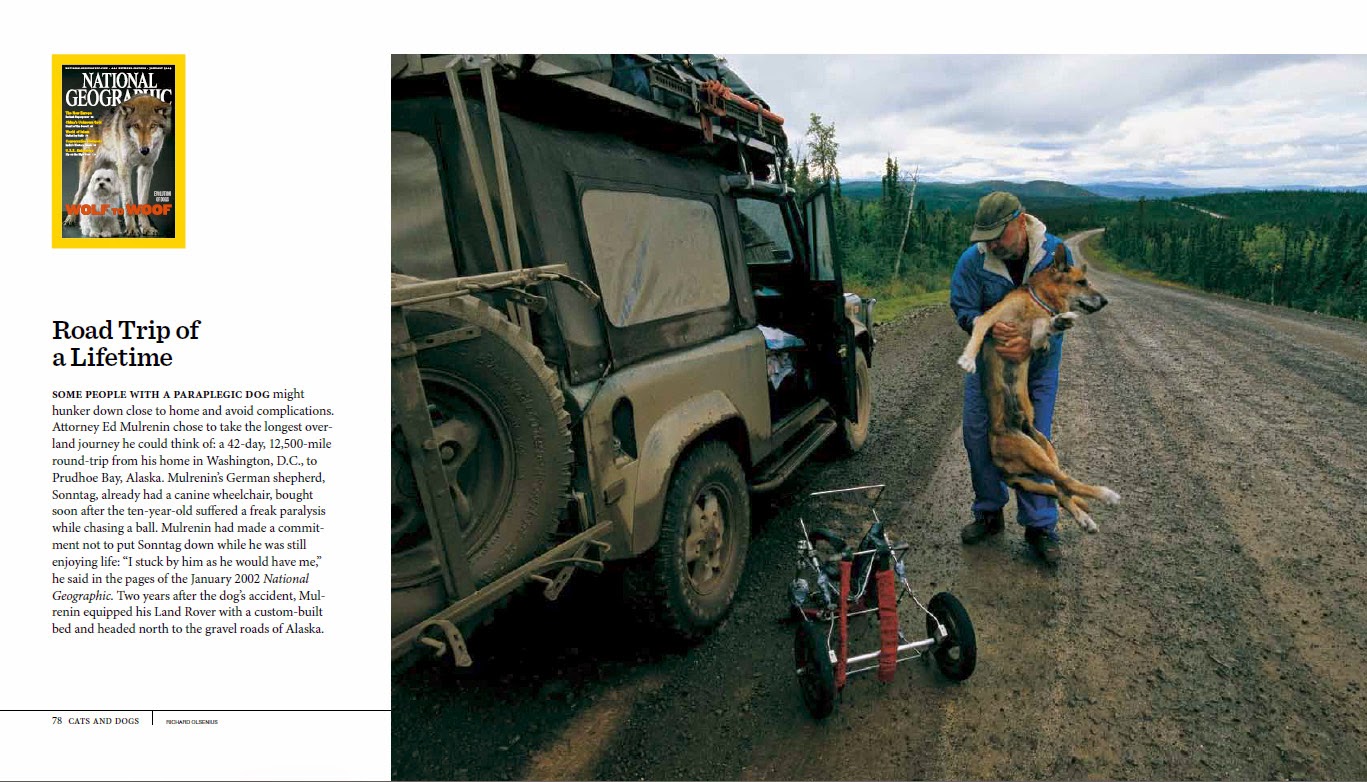 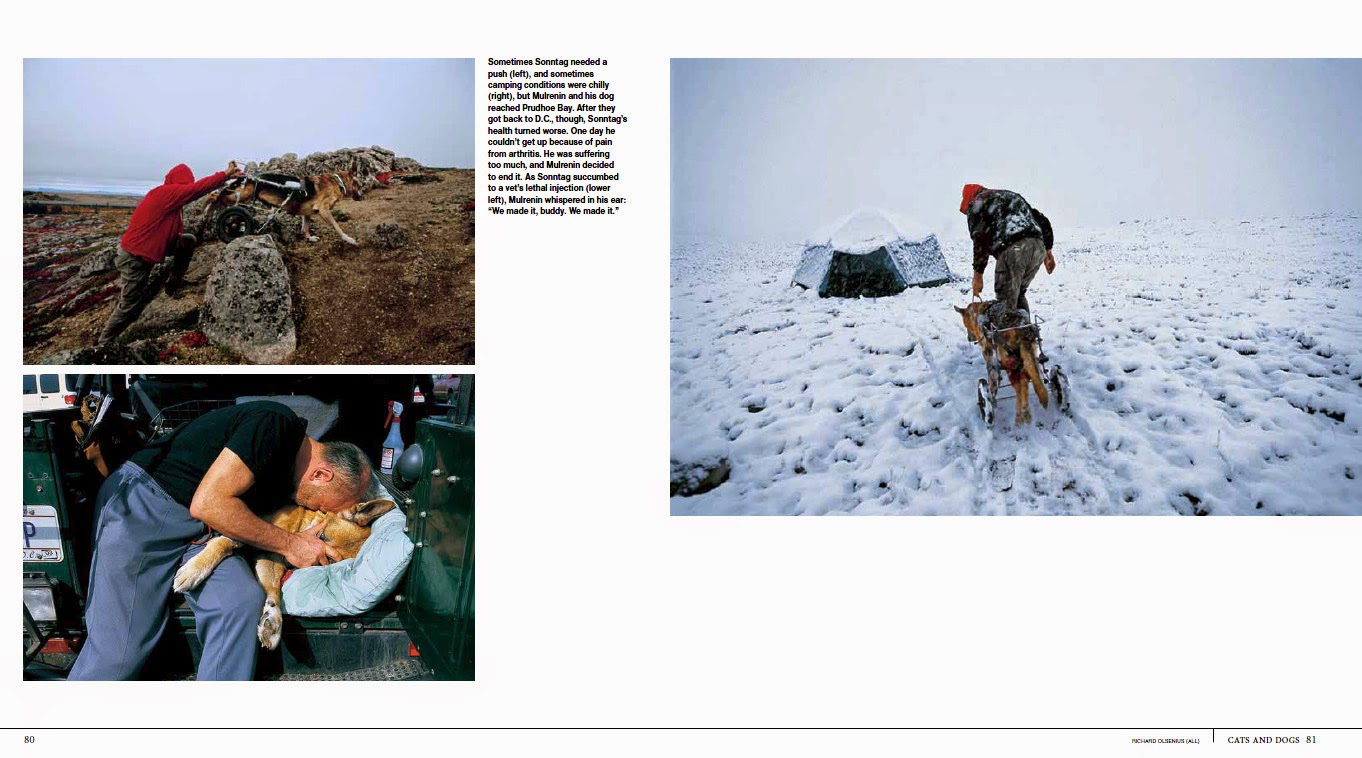